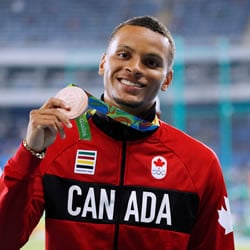 ProSpeakers is thrilled to announce one the fastest men in the world is joining our bureau.  At the 2016 Olympic Games in Rio de Janeiro, up-and-coming sprint star Andre De Grasse showed the world what the future has in store for sprinting. He became the first Canadian to win Olympic medals in three sprint events, capped by a personal best in the 100m finals where he went toe-to-toe with the icon Usain Bolt. Since his Olympic success, Andre has channeled his competitive drive into motivating the next generation of aspiring athletes. During his most recent injury break Andre is keen to deliver his motivational messages to corporations and kids alike.